“The World Turned Upside Down” 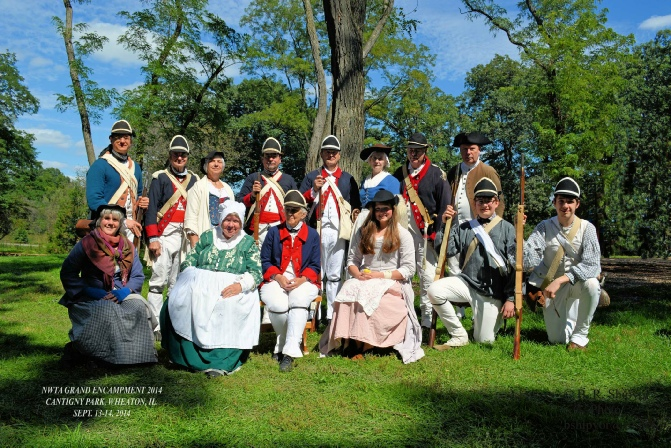 17 July 1775 authorized by the Virginia Convention 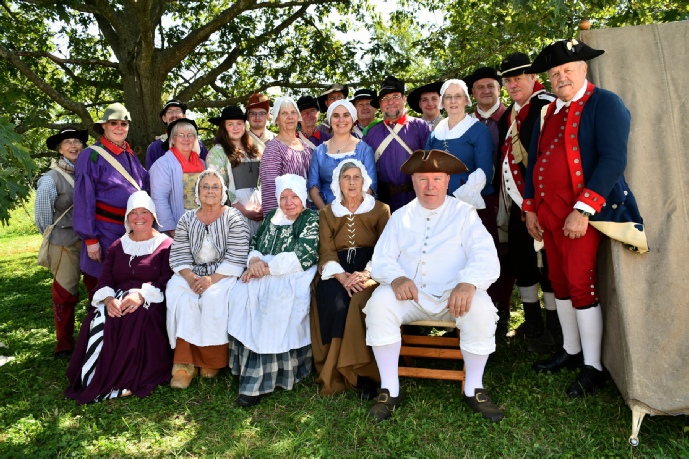 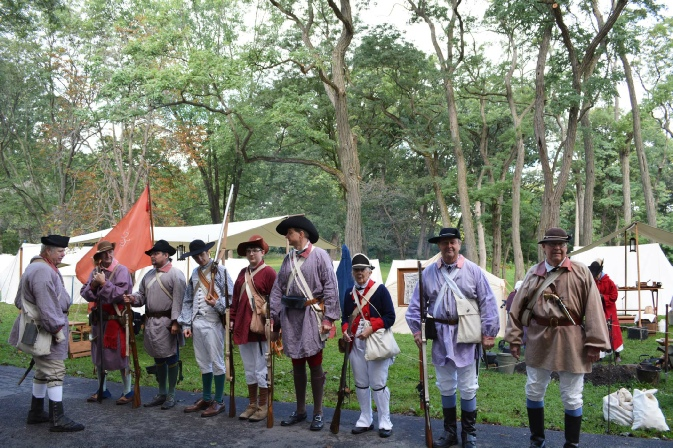 “George Washington prized this rugged pullover for its four-season practicality. Based on a farmer’s smock, the garment allowed for ease of movement for both musician and rifleman. Frocks were dyed many colors; purple is a color specific to Williamsburg [Virginia].”

From J Perkins:  2VA was founded in 1970.  Members of the 104th Illinois Volunteer Infantry [Civil War], an N-SSA [North-South Skirmish Association] unit, began the 2nd Virginia in 1970, and I joined the 2nd in 1971.  By that time they had applied to the BAR for membership, but were turned down, so in 1973 Vic [Mejias] went to a meeting in Wisconsin where the NWTA was formed.  The original 2nd was also a shooting unit, and I went to Tippecanoe, Indiana (Lafayette) where we did live fire on the original battlefield.  Like the 104th, we again used original muskets as there were no repros available at that time.  The original NWTA/2nd Virginia guidelines allowed any original flintlock made up to the adoption of the first percussion US musket in 1842.

From Al Potyen: In 1775, 2VA was Continental line!  Regimental uniforms were ordered from France, made, shipped, but never received.  They were sold at auction in London.  We had to make do.  Linen hunting shirts were  made, dyed purple (local plant dye).  Indigo was not available (embargo and blockade).  Red collars and cuffs were used to indicate facings. Virginia (Central Colony) was to have blue-faced red regimentals.  Purple was as close to blue as we could get. 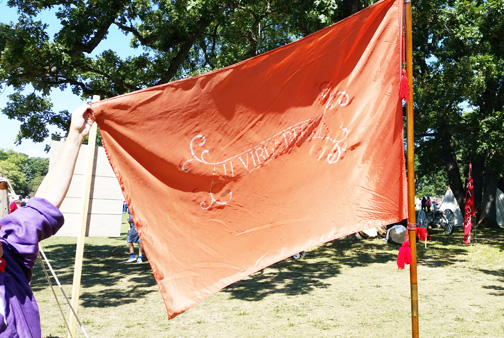 Our original reenactor group interest was in the 2nd Virginia group joining General Anthony Wayne as light infantry storming Stony Point in July 1779.  Unfortunately, it has been difficult to find the uniform associated with the Stony Point group.  Here is some information which has just come to light:

The reeanactor group then sees itself as part of the "new" 2nd Virginia and then as part of Captain Alexander (younger brother of Richard) Parker’s company (Thomas Posey's battalion), from which our primary impression uniform has been researched (Savannah, GA, 1782).  Perhaps a convenient way to follow the 2nd Virginia would just be to track Alexander Parker throughout his time in the war.  Check here for some timelines (he first joined under his brother Richard Parker*):  http://poegen.net/Misc/RevolutionaryWarVirginiaRegiment.htm   (use Control F “Alexander Parker”)

According to member J Perkins:  "The 1782 uniform represents the last form of the uniform worn by the 2nd Va. We were a small unit by that time, the bulk of the regiment, except for about 100 who escaped capture or who were away on recruiting duty, having been captured at Charleston in 1780.  From what I researched, the "new" 2nd Va was a unit made up after the 1780 capture, and was present at Yorktown (1781)*.  Our unit was commanded by Capt. Alexander Parker in LTC Thomas Posey’s battalion-sized detachment at Savannah in June of 1782, when we fought the last battle in the South (Americans all) before the end of the war.  This is what our uniform represents - June 1782.  I researched the coatee as best I could, and that is why we have it, instead of the long coat.  We were not one of the original companies of 1775.  Also, 6th Va. was consolidated with us at some point, I believe, after Valley Forge in 1778."

* According to member David Jahntz:  The reconstituted 2VA dug redoubts for the French artillery at the Battle of Yorktown.  Some members of the captured 2nd Virginia Regiment at Battle of Charleston (which ended on May 12, 1780) joined Gaskin's Virginia Battalion prior to the Yorktown siege.  At Yorktown this group was not part of either the 2nd Virginia continental or state regiments.  They did, however, dig the trenches and redoubt fortifications for the French artillery south of Cornwallis' Redoubts 9 and 10 in October of 1781.

Of the 25 Deadliest Battles of the Revolutionary War, the 2d Virginia Regiment fought in five of them: #2 Germantown, #3 Brandywine, #11 Monmouth, #12 Waxhaws and #15 Charleston.  If one counts the "reconstituted" 2d Virginia Regiment of 1781 which fought with Greene, you can add #4 Eutaw Springs and #13 Guilford Courthouse. 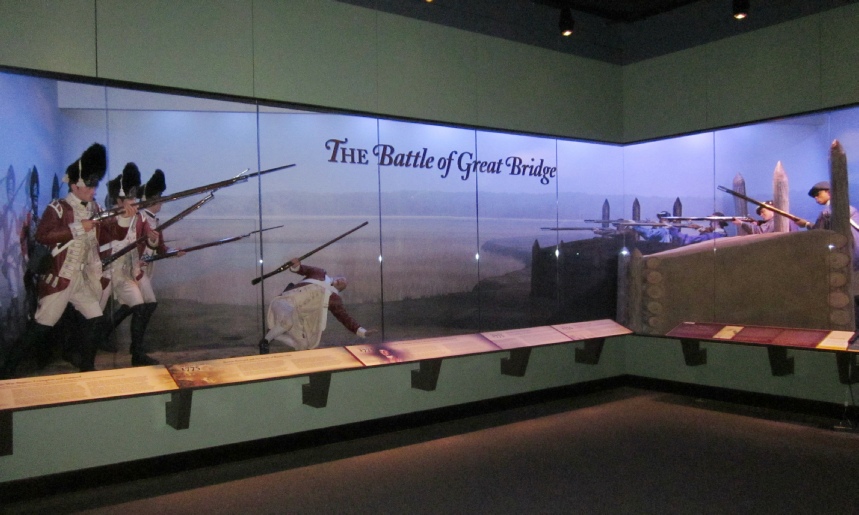 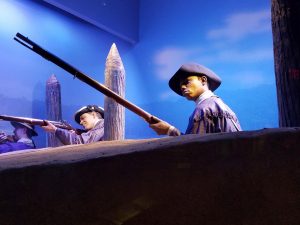 The 2d Virginia Regiment, along with elements of the Culpeper Minute Battalion, engaged the British at the battle of Great Bridge (modern day Chesapeake Virginia), which was a decisive victory. Colonel William Woodford, reporting on the 2d Virginia Regiment's Service at the Battle of Great Bridge, wrote in a letter published in Purdie's Virginia Gazette, December 15, 1775: "This was a second Bunker's Hill affair, in miniature; with this difference, that we kept our post, and had only one man wounded in the hand."[1]            https://en.wikipedia.org/wiki/Battle_of_Great_Bridge 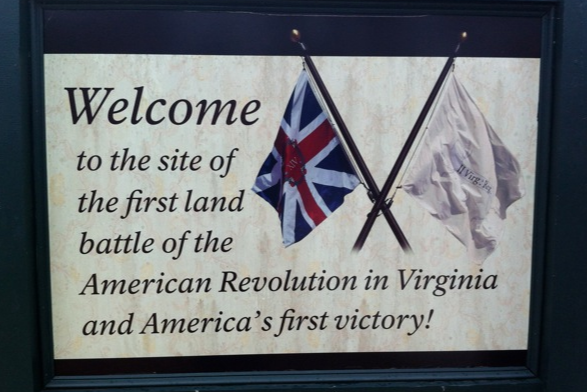 “The heroism and gallantry of the second Virginia regiment I cannot help particularly mentioning; they would do honour to any country in the world.  It is universally believed they behaved the best of any troops in the field.” 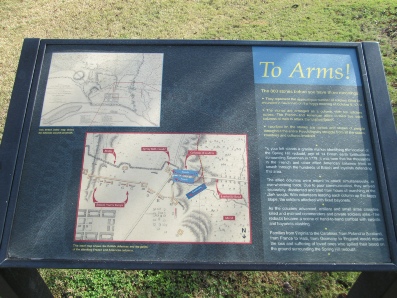 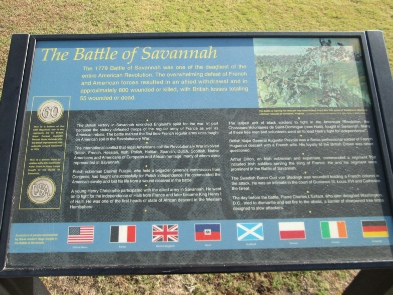 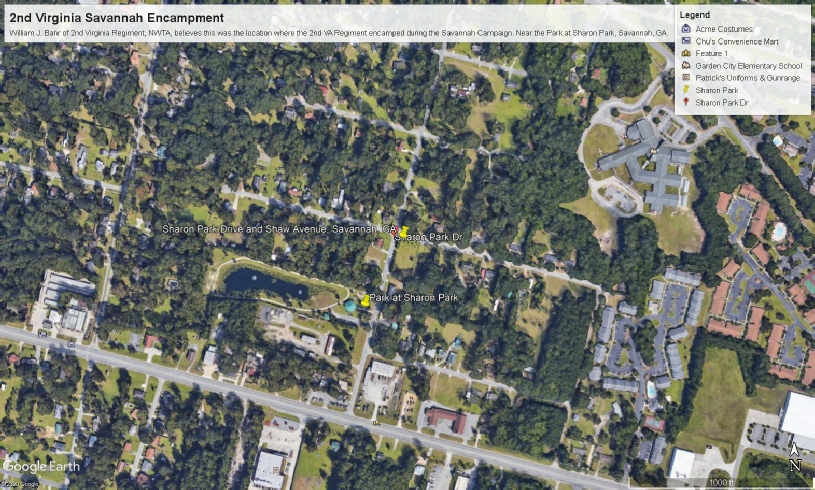 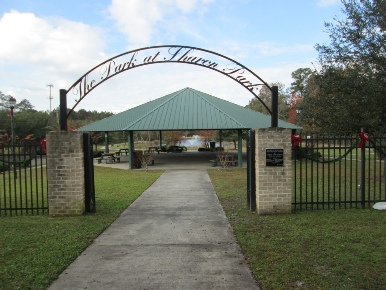 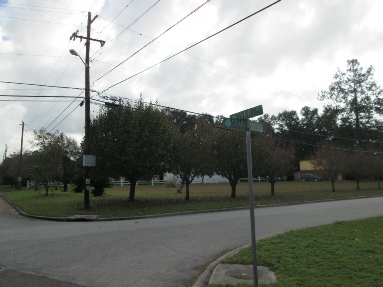 2VA’s last engagement was in Savannah, GA, in 1782.  Bill Bahr’s research led him to discern that 2VA under Col Thomas Posey was in the Sharon Park area of Savannah. https://allthingsliberty.com/2014/10/anthony-waynes-1782-savannah-campaign/   Using GPS he found what he believes is an area close to where 2VA was encamped.  He visited the area on 13 December 2015 and found the following information. See link below for Google Earth with coordinates.  As a historical reference, the Siege of Savannah was the Second Battle of Savannah in 1779, 3 yrs before this encampment.

The blue octagon in the Google Earth image above is the canopy in the Park at Sharon park in the image below. The intersection is the center of Sharon Park, which is ½ way between Savannah Hilton Head International Airport and Savanna.  Sharon Park is about 4 miles west-north-west (10 o’clock) of the Savannah historic district.  Ogeechee River runs to the west of Sanvannah.  No location found yet for the Battle of Ogeechee Creek.

The Park at Sharon Park is close to the intersection of Sharon Park Drive and Shaw Avenue in Savannah, GA.

* Richard Parker (1751 – 8 May 1780) was an American colonel who fought in the American Revolutionary War.  Son of prominent Virginia jurist Richard Parker, Captain Richard Parker of the 3rd Company, 2nd Virginia Regiment raised his company from the Westmoreland District (primary county of Westmoreland; with Montross as county seat ).  Parker received an officer's commission in a Virginia regiment [2nd Virginia] early in the conflict. He probably was present at Great Bridge and Norfolk.  Promoted to major [in the 6th Virginia Regt], he fought at Trenton in December 1776 and commanded the regiment at Second Trenton and Princeton in January 1777.  At Brandywine in September 1777 he led a [2nd Virginia] detachment of light infantry in delaying the British.  The next month he fought at Germantown.  Promoted to colonel [of 1st Virginia Regt] at Valley Forge, he led [first the 1st, 5th, 9th VA and then, right before the battle] a picked detachment at Monmouth in June 1778.  In May 1779, George Washington ordered him back to Virginia to recruit a new regiment.  After being sent south with a new unit of reinforcements [1st VA Detachment] for Charleston, South Carolina in late 1779, he died of wounds received at the Siege of Charleston in 1780.

Battles of the American Revolution

List of Virginia [to include 2nd VA] Revolutionary War Soldiers 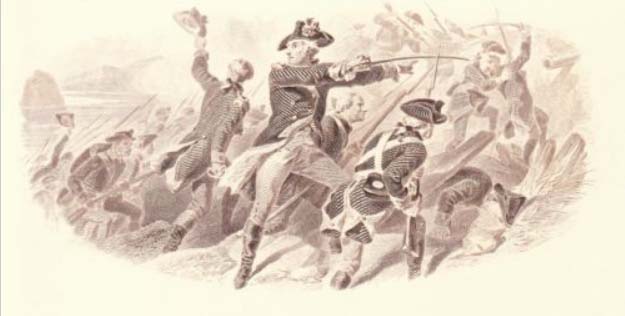 "'Give the order, Sir, and I will lay siege to hell!'  When 'Mad Anthony' Wayne spoke these words to

George Washington in the summer of 1779, he wasn't boasting.  Given Wayne's reputation for daring and

bravery, he likely would have marched into hell if Washington had ordered it.  Luckily for Wayne,

the General is said to have replied, 'Take Stony Point first.'"

"...Four regiments were assigned to Wayne.  The men, numbering a little more than 1300, were the cream

of the Continental crop, hardy veterans, many of whom had either been drilled in bayonet fighting by

Baron von Steuben or had drilled using his infantry manual."

"...Nathanael Greene, writing that same month[July], recognized the propaganda value of the victory.

'The attack was...conducted with great spirit and enterprise, the troops marching up in the face of an

exceeding heavy fire with cannon and musketry, without discharging a gun.  This is thought to be

the perfection of discipline and will for ever immortalize Gen. Wayne, as it would do honor to the 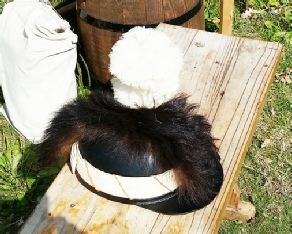 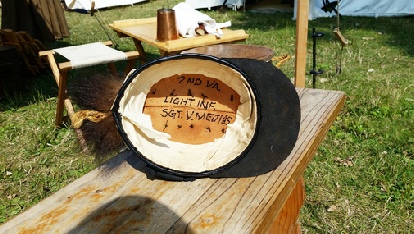 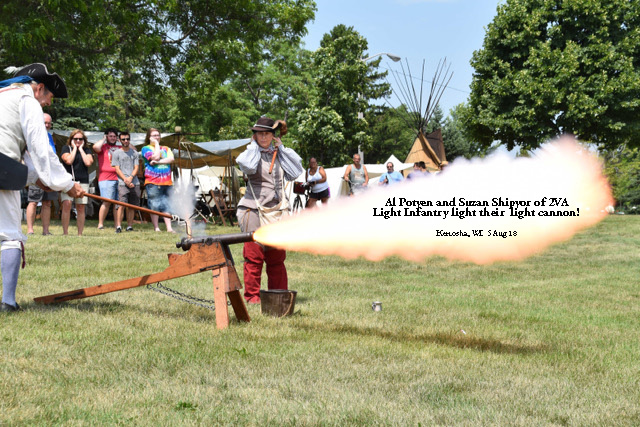 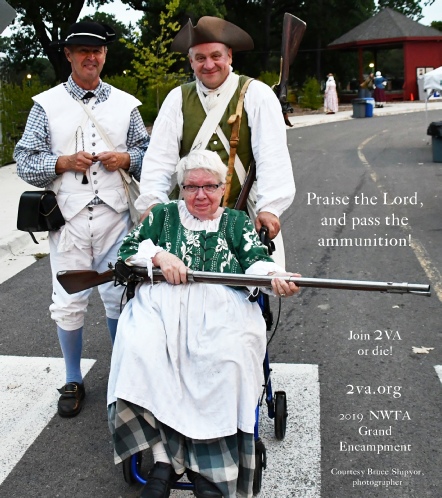 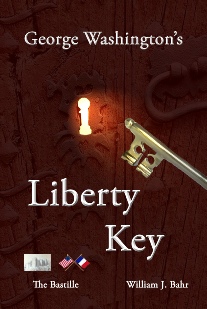